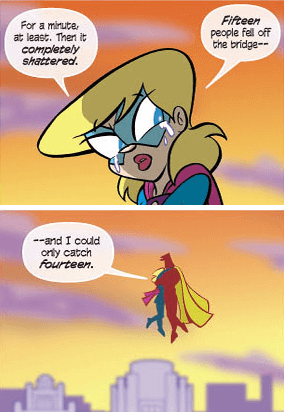 "Look, when you can do the things that I can... but you don't... and then the bad things happen... they happen because of you."
— Spider-Man, Captain America: Civil War
Advertisement:

How unfair is it that those people won the Superpower Lottery? All of that power and not a care in the world! They can get rich off those abilities or play "Superman"! That is, except...every time they take a coffee break, it means a Bus Full of Innocents somewhere fell off a cliff. When they took that Intrepid Reporter out on a date, a Giant Space Flea from Nowhere leveled Manhattan. And while they renegotiate their rent, Atlanteans invade Madagascar. And you can forget about sleeping.

You guessed it: With Great Power Comes Great Responsibility. Whereas Muggles can "pass the buck" in terms of the responsibility for recycling, civic duty, or taking the government to task, Superheroes can't. Being the only ones capable of dealing with supervillains and natural disasters means that the price of their inaction is the burden of a death they could have prevented on their conscience. Or not. The more responsibility they feel, the more Guilt Complex they suffer for "failing" to be responsible.

When it is addressed, it's why superheroes, especially the idealistic types, tend to be workaholics who feel great guilt over any and every death that happens on their watch. You see, the problem with having the power of a god is you also get the responsibility of one...which is a burden no sane human is built to take. Being (mostly) human, Heroes will have to balance the responsibilities implicit in having their abilities with basic needs like food, sleep, friendship, fun, romance, and perhaps even un-heroic hobbies and work.

Needless to say, this can go to either extreme. Some go overboard as they attribute any and every un-prevented accident to themselves, running themselves ragged, whereas others deny all responsibility in favor of living a normal life.

The former type tends to shun their civilian identity, friends, and loved ones. Often becoming exhausted, unbalanced, and much more at risk of snapping and going into a Heroic BSoD over a real or perceived failure. Some Super Heroes may even become a Martyr Without a Cause out of a subconscious desire to die just to get a chance to rest. This is especially true when the setting has Ungrateful Bastards who see fit to blame the hero for things they can't control. The latter will usually be somewhat like a Zen Survivor, while they might not go into supervillainy and actively cause death and destruction, one has to wonder at the good they could have done, and how many deaths they could have prevented...if they hadn't been, oh, mowing their lawn.

This can turn into a self-perpetuating cycle if the Hero Harasses Helpers that might take some of the load off.

The "happy mean" between the two is one where they use their abilities as much and as effectively as they can while taking time for themselves. The balancing itself is itself a great source of drama for a "kitchen sink"-style of superhero story. Samaritan Syndrome also lends itself well as a Drama-Preserving Handicap, preventing heroes from dangerously cutting loose.

Because of this trope, one key question about any superhero-containing universe is whether there is a surplus or deficit of superpowered awesomeness relative to crime and other dangers. If there is a surplus, heroes can kick back with no guilty pangs. If not, this trope may come into play in one form or another. If the hero isn't able to take time off, this can easily lead to Heroic Fatigue. To help with that and with this trope, many series will have other similarly powerful characters or True Companions take up some of the load, say "we got this one" to give the hero some rest/free time and remind them You Are Not Alone. The hero may also get a Self-Care Epiphany.

A sort of variation of this trope is when someone feels guilty because they didn't do enough.

Prone to Think Nothing of It — they think the heroics are part of the job, not something requiring special gratitude. See also Chronic Hero Syndrome (where the hero is constantly compelled to help everyone who needs it, regardless of circumstances) and Restricted Rescue Operation (where outside forces put limits on what you can do). If the guilt comes from failing to save a relative or loved one, then it's I Let Gwen Stacy Die.

Named in part for the parable of the Good Samaritan.

"I Could Have Got More Out."

Oskar Schindler saved at least 1,100 Jews from their certain deaths in the Holocaust. Yet he cries profusely, because he felt as if he could have saved more, even if it would have been just one more person.

"I Could Have Got More Out."

Oskar Schindler saved at least 1,100 Jews from their certain deaths in the Holocaust. Yet he cries profusely, because he felt as if he could have saved more, even if it would have been just one more person.