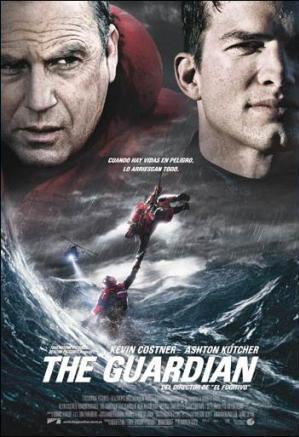 There is a legend of a man who lives beneath the sea. He is the fisher of men, the last hope of all those who have been left behind...they call him The Guardian.
Advertisement:

Senior Chief Petty Officer Ben Randall of Coast Guard Station Kodiak, Alaska is a legend among Coast Guard rescue swimmers. He has more than two hundred saves, holds all the records, and has been allowed to stay on past the usual retirement age. But then, a rescue mission in the Bering Sea goes terribly wrong. His helicopter crashes while trying to pull him and a shipwreck survivor out of the water. Out of his crew, only Randall survives.

After this, he is sent for some slower paced work training the next generation of rescue swimmers at the AST. There he throws out the usual training regimen in favor of a more practical curriculum, and very strict standards of performance. Here he meets Jake Fischer, a young swimming champ, who declares his intention to break all Randall's records. This starts a sort of rivalry between them, with Fischer trying to impress Randall, and Randall trying to get Fischer to quit or reveal the real reason he's in A-School. Eventually, they both realize that the other is being tormented by demons similar to his own, and that they are not that different after all.

Not to be confused with the British newspaper. Or the series Simon Baker was in before he was The Mentalist. Or the 1990 horror film of the same name.