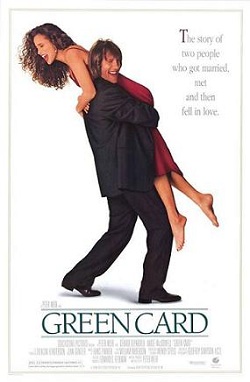 Georges (Depardieu), a Frenchman hoping to get a visa into the United States, and Brontë (MacDowell), a brash American woman hoping to get an apartment in a posh Manhattan neighborhood populated mainly by married couples, band together for mutual convenience. The two dislike each other immediately, but with the Immigration authorities closing in, they must pull together to make their marriage act seem believable. As is typical of Romantic Comedies, the two overcome their differences and begin to fall in love, leading to an atypical ending for the format...