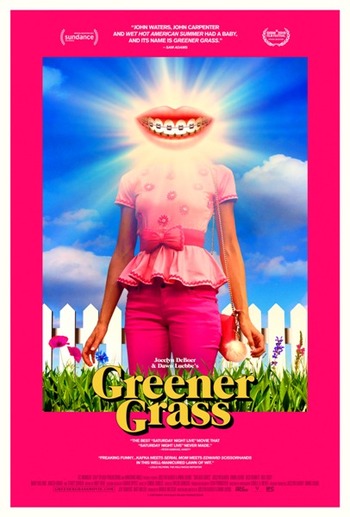 Greener Grass is a surreal Black Comedy, directed by Jocelyn DeBoer and Dawn Luebbe, released in 2019. DeBoer and Luebbe star as Jill Davies and Lisa Wetbottom, a pair of frenemy housewives in a deeply strange suburban town. All the adults wear braces on their teeth, everyone drives golf carts instead of cars, and the second grade teacher leads her class in a song about her mass murdering mother.

Greener Grass primarily concerns itself with frustrated, insecure Jill. Her son is an eccentric young boy who frequently wets himself, her husband is a Manchild obsessed with drinking chlorine-free pool water, and she feels threatened by Lisa and her (relatively) normal family. Throughout the film, various bizarre happenings disrupt Jill's life and stretch her past her breaking point.