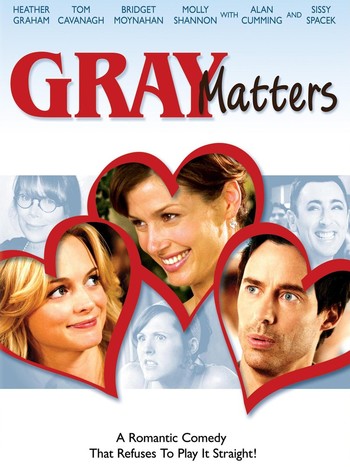 A romantic comedy about a brother, a sister and the girl of their dreams.
Gray Matters is a 2006 Romantic Comedy starring Heather Graham, Tom Cavanagh, and Bridget Moynahan.
Advertisement:

The main plot revolves around Gray (Heather Graham), and her newly discovered sexuality. Gray lives with her brother, Sam (Tom Cavanagh), and they are very close. Everything changes when Sam meets a girl named Charlie (Bridget Moynahan). Sam falls in love with Charlie and they marry right away. On the night before the wedding Charlie and Gray share a hotel room, and eventually share a drunken kiss, which causes Gray to begin questioning her own sexuality. She also falls for Charlie in the weeks after the marriage, and begins to accept that she may be gay.