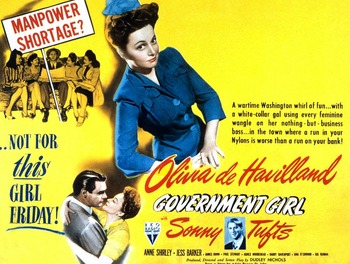 Washington, D.C. The city teems with a vastly expanded federal bureaucracy as the United States fights World War II. Ed Browne (Sonny Tufts) is a Detroit auto engineer who has been brought to Washington to oversee bomber production. He is paired up with secretary Elizabeth "Smokey" Allard (de Havilland), one of the many young women brought to the capital for secretarial and administrative work related to the war effort.

Ed is a hard-charging, "build first and ask questions later" type. He has to be guided through the Washington schmoozing and bureaucratic infighting by Smokey, already a veteran of D.C. politics. Predictably, Ed and Smokey begin to develop feelings for each other, but Smokey already has a beau in the person of Dana McGuire (Jess Barker), a ruthlessly ambitious lawyer for a Senate committee. The personal meets the political when Dana, a man on the make, unfairly targets Ed on suspicion of graft.

Olivia de Havilland's last film while under contract to Warner Bros. (actually made for RKO after she was loaned out). She made the film under protest, and soon filed suit against Warners, a suit that led to a major court decision limiting the lengths of actor contracts.

Agnes Moorehead has a small role as a snobby socialite. Compare The More the Merrier, another 1943 film also about overcrowding and exploding bureaucracy in wartime Washington.