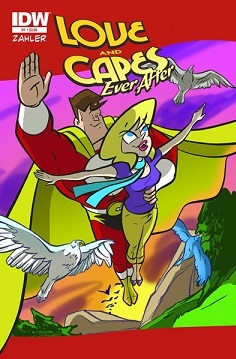 Can you read my mind?
Abby Tennyson is starting a relationship with her accountant, Mark Spencer. Sure, he's a bit clumsy, busy at odd times, and very different from the sort of guys she usually dates, but there's a real connection there. And Mark, for his part, loves her dearly. He just has to get ready to tell her the biggest secret of his life.
Advertisement:

He's actually the Crusader, one of the world's most powerful superheroes.

Love and Capes is, at its heart, a romantic comedy that shows the progress of Abby and Mark's relationship—the mundane (dealing with Mark's highly critical mother), the not-so-mundane (such as the fact that one of Mark's ex-girlfriends is Amazonia, who has much the same power set as him and who wants to get back together with him), and the more four-color problems that only superheroes have to deal with (an Evil Twin and the like).

Love and Capes was originally a twelve-issue print comic by artist Thom Zahler, with two followup miniseries, Ever After and What to Expect. Zahler has begun posting it online as a webcomic here

. The series has returned again with The Family Way (2020) showing Mark and Abby raising little James and Hayley; and In the Time (2020-2021), now in progress, about how our heroes deal with the COVID-19 Pandemic. You can read it serialized here for free.

In the Time Of COVID has the following tropes: