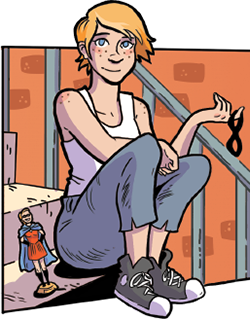 Just your average, everyday, ex-superheroine.
"My name is Alison Green. I'm nineteen years old, I'm invincible, I'm stronger than any human being who has ever lived, and I have no idea what the fuck I am doing."
Advertisement:

is a Webcomic by Brennan Lee Mulligan and Molly Ostertag. Formerly updating Tuesdays and Fridays from 2012, it went on hiatus when Brennan started Dimension 20 for CollegeHumor in 2018.

Alison Green is the former superheroine Mega-Girl. Key word, former. After deciding that superheroes can't really make a difference in the world when it's not giant robots and evil masterminds, Alison goes into retirement in order to focus on her college education and figure out just what she wants out of life.

Her old team, the Guardians, are still a peripheral part of her life. Pintsize can't quite handle that the heroic age isn't what the comic books made it out to be. Sonar retired to the private sector after a few years as well. Moonshadow felt like she had to take up the slack after Mega Girl quit the team, and has built up no small amount of resentment against Alison as a result.

Alison's little sister Jennifer is having a hard time coping with a superpowered older sister, and Alison is just trying to do her own thing with the shadow of her own superheroic celebrity hanging over her head. Complicating things further is Patrick, formerly the supervillain Menace, whose up-and-down relationship with Alison causes her much consternation.

The comic has been officially on hiatus since September 2018.