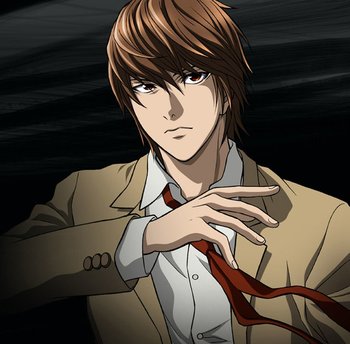 Advertisement:
"This world is rotten, and those who are making it rot deserve to die. Someone has to do it, so why not me? Even if it means sacrificing my own mind and soul, it's worth it. Because the world can't go on like this."

The Protagonist of the series, but not the hero.

Light is a genius student who has one major flaw... namely, one hell of a God complex. He has a hatred of the criminal element of the world, but for most of his life took a "what can you do" approach. Then, he finds the Death Note dropped by the Shinigami (Death God) Ryuk and his world is turned upside down. He begins using the notebook to kill criminals, believing that in doing so, he could scare the world into becoming more law-abiding. At first the authorities are powerless to stop Light's spree of vigilante justice, and with no clue about his hidden identity the public nicknames him Kira, a Japanese pronunciation of the English word "killer".

Light finds an equal and opposite in L, the elusive international detective hired to find and prove the identity of the person behind the mysterious string of murders. As the two of them try and outwit the other in an escalating game of cat and mouse, everyone else gets swept up in the ensuing chaos.