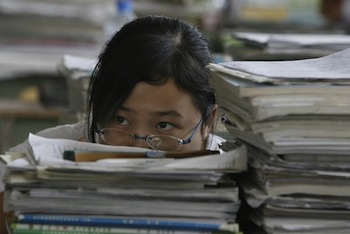 ...and it's not even finals week.
Advertisement:

In many countries, entry to university is based on a harsh, gruelling, often very competitive set of exams taken at the end of one's final year of school. A cram school is a special school, generally privately run, whose entire, unashamed purpose is to enable pupils to pass these exams. To this end, the focus is almost entirely on answering questions from past exam papers and fine-tuning answering strategies. Cram school is generally attended in addition to regular school, but some offer full-time education.

The role of these schools is a matter of controversy. Many teachers oppose them on the basis that they undermine the work and dedication of regular teachers. Their opponents argue that if teachers were doing as good a job as they should, there would be no need for cram schools. Cram schools can also be dangerous to students' health, as the students risk overwork and classes are often very early in the morning or late at night to fit them around the regular school schedule.

The prevalence of cram schools varies in different countries around the world, but they're most prevalent in East Asia, where the Education Mama is a common phenomenon and university entrance exams are so important that they can basically make or break a teenager's future. As such, it's a common Anime trope — a particular twist is for the Smart Kid going to cram school despite not needing it at all or still being in grade school, just because they enjoy it.

See Summer School Sucks for the Western equivalent for making up missing credits off-term much to the student's chagrin.

open/close all folders
Anime and Manga
Film
Literature
Live-Action TV
Video Games
Real Life
Cram schools tend to be different around the world depending on how different countries' societies see education and how their university entrance requirements work, and some countries have interesting quirks: