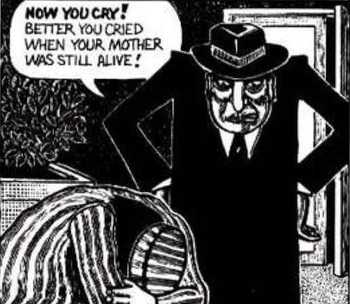 "Thou shalt not afflict any widow or orphan."
— Exodus 22:21, The Bible
Advertisement:

Usually, when you know someone recently (or sometimes not so recently) lost a loved one, the polite thing to do is to offer condolences.

Then you have people who, for whatever reason, not only show a lack of sensitivity for another person's loss but will outright exploit the fact that a person lost a loved one in order to antagonize them, even if they had nothing to do with that person's death. It goes without saying that this is a big way to Kick the Dog, marking the person doing this as a Jerkass or worse.

This can overlap with Would You Like to Hear How They Died?, however, if the loss was one that the speaker themselves caused. This can also overlap with Speak Ill of the Dead when a character mocks another for being upset about losing a particular loved one. Finally, this trope can overlap with Fisticuff-Provoking Comment if the bereaved responds by opening up a can of whoop-ass on the person offering disrespectful condolences.

Compare Last Disrespects, where someone shows mocking behavior towards the deceased (typically at a funeral). Compare also "The Reason You Suck" Speech and Relative Button.

While this may be Truth in Television on occasion, there will be No Real Life Examples, Please! After all, discussing the real-life petty behavior of other people is just asking for trouble.

As a death trope, all spoilers will remain unmarked.