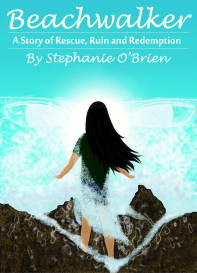 "My mother told me a story once. A story about a wave that washed up all the starfish and left them dying on the shore. And she told me about the Beachwalker, the only person who thought the starfish were worth saving, even if he couldn't save them all.

"But she never told me what the Beachwalker would do if one of those starfish was a shark."

When the Beachwalker found the dying POW, she thought he was just another starfish to be thrown into the sea. A dangerous killer who needed her help. And to be needed was the only way she knew how to live.

But in her struggle to keep him alive in a town rocked by earthquakes and brutalized by war, amidst all her determination to hide him from his enemies and to hold starvation at bay, she encountered an obstacle she couldn't have foreseen. A resilient mind to equal her own, and the will of a starfish who may not want to be saved.

Set amid the dusty remains of a devastated village, Beachwalker is a haunting journey into the heart of a person whose identity has become her cage, and whose reason for living puts her very survival at risk.
—From the official product page
Advertisement:

A novella just over 30,000 words long, Beachwalker follows the struggles of a cast of nameless characters as they work to survive in a war-torn and earthquake-rattled country. Deliberately ambiguous and surreal, the novella focuses mostly on the inner struggles of the protagonist as she fights for her patient's life, though external, physical danger is never far away.

" is Stephanie O'Brien's first published work, having been made available on Amazon's Kindle in 2012.