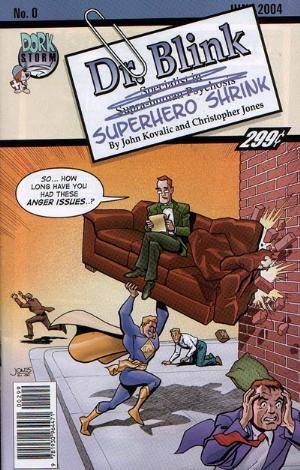 Action on the Cover of issue #1 of the Comic. Parody is fair use.
Dr. Blink, Superhero Shrink is (or was) a comic book written by John Kovalic and drawn by Christopher Jones. The comic is a Parody — essentially a giant Lampshade stuck on a basic fact about superhero comics; the lead characters are almost invariably a seething bundle of psychological issues, if you look at them at all closely. Dr. Frederick Wertham Blink himself is a professional psychiatrist who, after an encounter with his city's superhero population, wrote a book about their rather obvious issues, Chicken Soup for the Super Soul. This was not only a commercial success, it brought him a string of super-powered patients, turning him into a commercially successful specialist practitioner. Most of the stories are about the cases he treats.
Advertisement:

Four issues (numbered 0 to 3) were published by Dork Storm Press in the early 2000s, and the contents were eventually collected with some extra material into the trade paperback, Id. Ego. Superego!. However, for personal reasons

, Kovalic then ceased publishing paper comics, and although there have been subsequent hints of possible further Dr. Blink projects, little has yet appeared. However, Dr Blink is intermittently active on Twitter, posting aphorisms about superhero psychology.

The comic has its own Web site here,

including most of the Dr. Blink material ever published and at least one strip that never saw print publication.