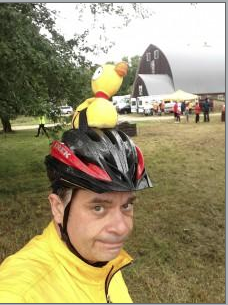 John Kovalic (born Robert John Kovalic, Jr., 24 November 1962) is a cartoonist, illustrator, and writer. He has worked as an editorial cartoonist, primarily for the Wisconsin State Journal, and his work has appeared in The New York Times and The Washington Post; he also wrote the superhero parody comic Dr. Blink: Superhero Shrink. However, he is primarily associated with the Tabletop Games industry, both as a designer and illustrator for games such as Apples to Apples and Munchkin, and for his long-running comic book/Webcomic, Dork Tower, an amiable satire of the hobby and its enthusiasts.
Advertisement:

Kovalic is a co-founder and co-owner of Out of the Box Publishing, which publishes just some of his work. The Dork Tower Web page

is the place to go for news of his activities and publications.

Tropes associated with John Kovalic include: