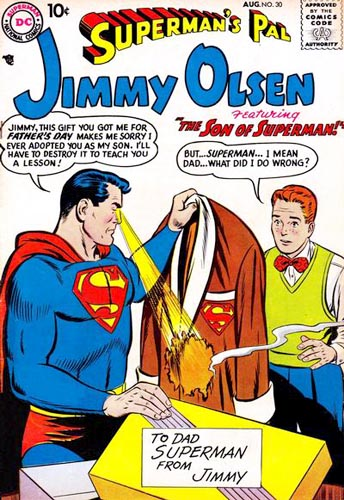 *Gasp!* How can this be?!
Innocent Bystander: Superman — don't just sit there! Stop that thing before it wrecks Metropolis!
Superman: [smiling] That's just what I'm waiting for it to do!
— Cover of Superman #246

It's a widespread tactic in serial fiction: show a teaser portraying the normally upright hero acting in an evil and despicable manner, causing the audience to wonder what the heck's going on and then, hopefully, to read/watch/listen to the thing you're advertising.

You look at the cover to the newest issue of your favorite comic, and what do you see? The superhero, apparently killing his sidekick and Love Interest! Or, On the Next episode of your favorite prime-time TV series, the main character goes bad, selling his team out to the Big Bad and shooting the Plucky Comic Relief in the face!

So you read or watch the installment in question, and find out It Makes Sense in Context. The hero, or someone in the supporting cast, was The Mole, a Secret Test of Character, Not Himself, Really Not Himself, putting on a show, or had learned that if the Happily Adopted son had gotten what he wanted for Christmas, it would have resulted in the destruction of every known universe simultaneously. It is also entirely possible that it was an "imaginary story" or in some way All Just a Dream. And many comic books flat-out ignore elements on the cover. For television, Manipulative Editing might also splice together two unrelated scenes for the promo, and it turns out the hero was being a dick to someone who actually deserved it. And now you're down a quarter. You should have known that Covers Always Lie and you can Never Trust a Trailer, but you were pulled in... by Superdickery.

Warning: Silver Age comics did have a tendency to induce Comedic Sociopathy in characters, alongside the strange plot devices and twists. This means that even if Superman wasn't as evil as the cover made him sound, the reader might still have to say "what a dick!" at the end of the story. The reason for this trope, however, isn't the writer's intent. During the Silver Age, the covers were designed first, and the writers had to work around that cover that had been drawn without a story.

In comics, a Cover Drop will often explain the truth behind the dickery. Compare with Clickbait Gag, an In-Universe use of one of Superdickery's web equivalents, Clickbait.