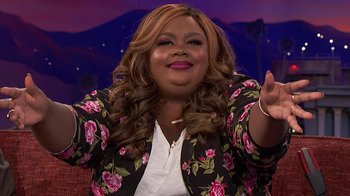 Nicole Byer (born August 29, 1986) is an American comedian, actress, writer, television host, and podcaster. She is best known for being the host of the Netflix show Nailed It! and for her many voice acting roles. She also had a podcast named Why Won't You Date Me? and has a podcast with Lauren Lapkus called Newcomers, where she and Lauren watch all of the Star Wars and Lord of the Rings movies, having never seen them before, and then discuss them with a guest.