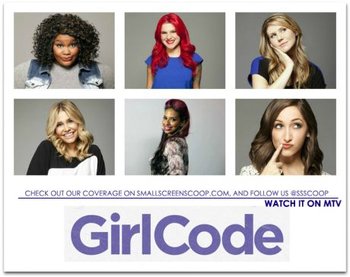 A MTV series which discusses a deal of tips and tricks for the modern young woman in the city. It is a Distaff Counterpart and spinoff of Guy Code on MTV2. Each episode has the cast (composed primarily of female actors, musicians, and comedians, though there are several guys as well) discussing four topics (such as cheating, pregnancy scares, being farty, and many other aspects of life). Between these segments are the occasional vignette showing comical encounters a girl might run into, and segments like "Is That Weird?" (where a member of the cast shares an anecdote or habit and asks if it's weird.