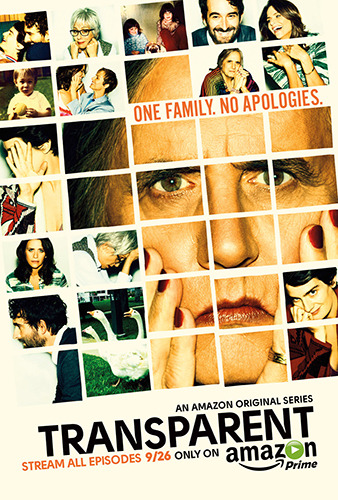 "My whole life I have been dressing up as a man. This is me."
—Maura Pfefferman
Advertisement:

Jeffrey Tambor stars as Maura, the matriarch of The Pfeffermans, a Jewish family based in Los Angeles who all have their own individual issues with identity. Maura is struggling with finally coming out as a transgender woman in her 60s, her ex-wife Shelley (Judith Light) is attempting to keep her second husband alive, her eldest daughter Sarah (Amy Landecker) is a married mother of two cheating on her husband with her former lesbian partner from college, her son Josh (Jay Duplass) is a successful music producer with a very chaotic romantic life, and her younger daughter Alexandra (Gaby Hoffman) is a constantly unemployed slacker trying to find a purpose in life between drugs and mooching off others.

The show was extremely well received, earning itself and Tambor awards at the 72nd Golden Globes. Tambor would go on to win an Emmy for his performance. It is seen by many as Amazon Studios' first hit original show, in the same way that House of Cards was for Netflix.

The show's second season was released on December 11th, 2015. For the second season, Soloway hired a transgender woman, pianist and singer Our Lady J

, onto the show's writing staff, and the show has a policy of preferring transgender actors for transgender roles when possible; The transgender-friendly policy also extends behind the set, where restrooms and prep areas are gender-neutral.

the series for a third season, expected to be released in 2016, and a fourth for 2017. On November 2017, it was announced that Tambor had exited the series after multiple sexual harassment allegations.

In 2019, following Tambor's departure, the series wrapped up with a single feature-length musical episode titled Transparent: Musicale Finale instead of a final season.

Transparent in general provides examples of the following tropes: