Video Game / One Step From Eden 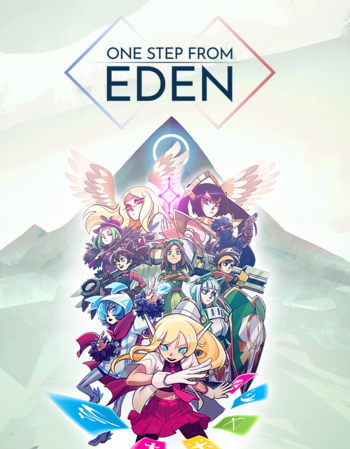 One Step From Eden is a Roguelike action RPG with Deckbuilding Game-inspired mechanics, developed by Thomas Moon Kang and published by Humble Bundle. It was released for PC via Steam and Nintendo Switch on March 26, 2020, and later released for PlayStation 4 on June 6, 2020 and Xbox One, Xbox Series X|S, and PC via the Microsoft Store on November 11, 2021.

Set in a war-torn world, your mission is to reach the eponymous Eden, the last beacon of hope in the world. As you venture to Eden, you meet several adversaries that stop you from reaching the promised land, forcing you to fight your way. When you best them in battle, you can choose to spare them and be on your way, or finish them off.

was announced for release in 2022.

One Step From Eden contains examples of: