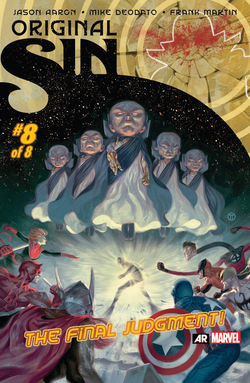 Everyone has one.
Advertisement:

Original Sin was a major 2014 storyline that went through many Marvel Comics lines. Uatu the Watcher, a major staple of the Cosmic Marvel Universe, was struck down by a mysterious assailant and killed. His death draws out the Marvel heroes to find out who killed him and why. However, it seems that something of Uatu's is missing - his eyes. What did the Watcher see and what secrets does he hold towards our major heroes?

The storyline starts in May 2014 and connects through many comics, including Spider-Man, The Avengers, Deadpool and more, promising big changes for many heroes and picking up on plot threads that started as early as the beginning of the Marvel NOW! initiative.