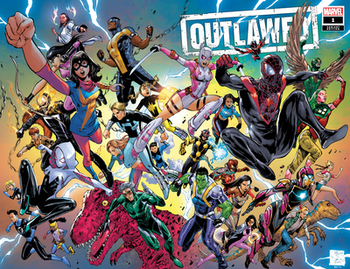 Outlawed is a new status quo for the teen heroes of Marvel Comics. Launching with a one-shot in March 2020, it sees the enactment of a new law, called Kamala's Law, which means that anyone aged 21 or under is no longer allowed to be a vigilante. This, obviously, is a major problem for the many teen heroes, who, led by the Champions, will fight against this new law. The initiative sees the return of Power Pack. New Warriors was due back too, but then controversy and coronavirus happened. The one-shot was written by Eve Ewing, who will also be writing the new Champions series.