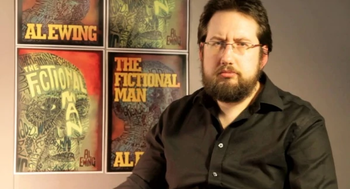 Would you know more?
A rising star at Marvel Comics. After a few years writing for 2000 AD (mostly Judge Dredd and Zombo note and a Fanfic

of Comic Book/{{52}} from Ralph Didney's perspective), he got his first gig at Marvel with the digital series Iron Man: Fatal Frontier, and the rest is history.
Advertisement:

Ewing is best known for his work on "second-string" Avengers titles such as Mighty Avengers, New Avengers, U.S.Avengers and Ultimates, as well as the critically acclaimed Loki: Agent of Asgard and Immortal Hulk.

Signature elements of his work include continuity deep-dives that often weave together inconsistent characterisation into a cohesive arc, giving love to lower-tier characters in need of it, explorations of philosophical ideas, and — in his lighter works — a love of funny character intro captions.

Ewing has also worked on Jennifer Blood for Dynamite and the 2014 Doctor Who Eleventh Doctor comics for Titan. In 2020, he launched his creator owned title We Only Find Them When They're Dead.

In June 2021, he publicly came out as bisexual.