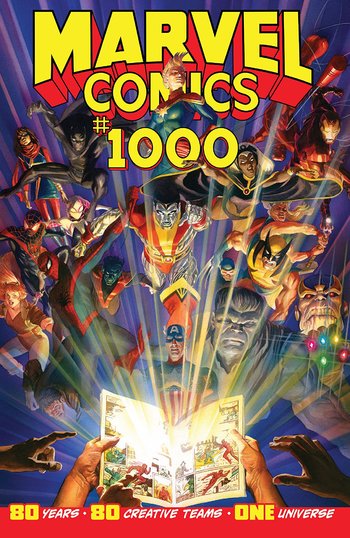 Marvel Comics #1000 is an extra large comic book published by Marvel Comics for their 80th anniversary. It contains over eighty pages, each page with one comic and corresponding to a year that Marvel (or Timely or Atlas Comics) published a comic. It's called Marvel Comics #1000 due to the editors extrapolating what number Marvel Comics (which turned into Marvel Mystery Comics and then Marvel Tales) would be had it not stopped being published.note Though according to The Hollywood Reporter

, even if Marvel Comics had continued to be published monthly since 1939, it would only have gotten to roughly issue #960 at the time #1000 was published

The overall story of the book, written by Al Ewing with a variety of artists, is about the Eternity Mask — a mysterious mask that makes the wearer equal to whomever they fight — and the people who wore the mask, tried to use the mask for their own purpose, or sought the mask. As Robert daCosta, Jimmy Woo, Night Thrasher, and Adam Brashear try to unravel its mystery, they soon learn that the Eternity Mask is intrinsically tied to the history of the Marvel Universe.

The issue was followed up by Marvel Comics #1001, which showcased more one page stories that couldn't fit here.