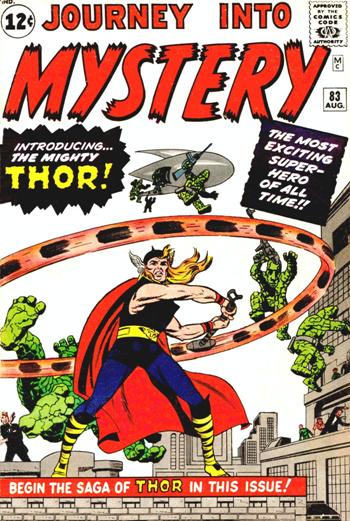 Originally an Anthology Comic by Atlas Comics which later became Marvel Comics, Journey Into Mystery is known for debuting The Mighty Thor, in issue #83 (August, 1962), by Stan Lee and Jack Kirby. The series would regularly feature Thor there until issue #125 (February, 1966). With issue #126 (March, 1966), the comic was renamed The Mighty Thor.

It has been revived as a separate title a few times since then from 1972 to 1975 as an Anthology Comic, and again in the 1990s replacing Thor's book with issue #503, following the Heroes Reborn relaunch of key Marvel properties from 1996 to 1998.

The title was revived in the 21st century following the Fear Itself event, and the relaunch of Thor's book as The Mighty Thor.

The series was cancelled again with Issue 655, but as part of the War of the Realms event series in 2019, Journey Into Mystery returned as a five-issue limited series tie-in written by The McElroys. This miniseries involved the likes of Miles Morales, Kate Bishop, Wonder Man, and more as they search for Thor's secret baby sister to end the war.

Because all the books under this name are part of the Thor family, all characters from all series can be found here.

Journey into Mystery provides examples of: