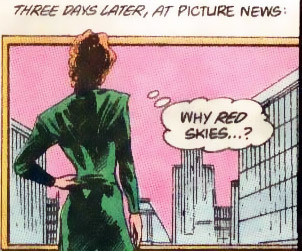 We don't know, either — this is the extent of your tie-in to the event in question.
"At any rate, we have here the current form of Marvel crossover taken to its logical extreme — an event where anything can qualify as a crossover, just as long as it isn't in continuity. There's pretty much nowhere further to go from there, unless you're going to do a crossover called Shit Happens."
— Paul O'Brien

When a comic slaps a big, visible "Crisis Crossover" logo on the cover, but has only a token Shout-Out to the Big Event that only peripherally affects the plot of the issue in question, that's a Red Skies Crossover. In some cases, the extent of the crossover is as nothing more than a Continuity Nod.

The name's taken from the original Crisis Crossover, Crisis on Infinite Earths. Almost every comic in The DCU was involved, but in many cases, the "involvement" was just characters looking up and wondering why the skies were red before moving on with whatever they were actually doing.

Since then, most Crisis Crossovers have had at least a few. For example, in Infinite Crisis, a squad of blue cyborgs would rampage through a few panels and then fly off, leaving the characters (and the reader) wondering what the heck that was before going on with the story.

This, generally, is good for the book it appears in, getting it the extra readers from the crossover without having to derail its storyline because of it, but bad for the crossover overall, through dilution of the brand.

See also Wolverine Publicity, Metaplot. Red Sky, Take Warning is when the red sky is actual cause for concern within the story itself.

In the television world, this is sometimes referred to as a crossover theme night.