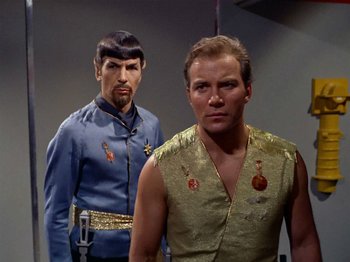 Now here's a particularly famous one, and not just for Mirror Spock's Beard of Evil. (Although that's up there.)
Advertisement:

The USS Enterprise is in orbit of a planet ruled by the peaceful Halkans. A landing party consisting of Captain Kirk, Doctor McCoy, Lieutenant Uhura, and Scotty are on the planet to convince the Halkans to allow the Federation mining rights. The inhabitants of the planet, however, are convinced that Humans Are the Real Monsters, and despite Kirk's assertion that if the answer is "no" then they will simply be on their way without troubling the Halkans further, the aliens remain entirely unconvinced.

The landing party beam back to the Enterprise. But it all goes horribly wrong, and our heroes find themselves Trapped in Another World. In this Alternate Universe there exists not a peaceful confederation of planets, but instead an Evil Empire that slashes and burns its way across the galaxy. The first and most obvious change is that Spock has got a goatee beard; but there are other signs: nearly all the walls of the Enterprise are emblazoned with a logo of a sword through the planet Earth, and there are also agony booths around, used for punishing misbehaviour among the crew.

Finally finding a moment to take refuge alone, our four man crew attempt to figure out what happened. They reason that an ion storm around the planet disrupted the transporter and sent them to a Mirror Universe by accident, swapping them with their own counterparts from this universe. They make a plan to return home, replicating the unique situation that brought them here. But until then they will need to try and blend in as best they can. (As for the unsettling thought of what their counterparts are doing, it later turns out that Spock back in their own dimension has it under control; their barbaric character was immediately obvious to him and he had them hauled to the brig right away.)

In his quarters, Captain Kirk meets Marlena Moreau, who introduces herself as "the Captain's woman". He resists the temptation to Boldly Come, instead subtly pressing her for information. Moreau introduces Kirk to the real source of his evil counterpart's power: the Tantalus field, a device which he stole from an alien planet, and which allows him to evaporate people at the touch of a button. Kirk, naturally, resists the temptation to push it and see what happens.

Our crew put their plan into action. While Lieutenant Uhura distracts Mirror Sulu from his security monitoring board, Scotty shorts out the main phaser couplings and siphons power off to the transporter. Kirk, in the meantime, has to deal with an assassination attempt by Mirror Chekov, and another possible attempt from Mirror Spock. In the sickbay, a fight breaks out between the crew and Mirror Sulu's gang of thugs. Marlena Moreau evens the odds by using the Tantalus field to remove Mirror Sulu's gang, and our crew triumph. But Mirror Spock arrives on the scene. His curiosity about the crew's bizarre behaviour since returning from the surface has been piqued, and he performs a Mind Rape on the doctor to get the full story.

Moreau guides Kirk to the transporter room, but then performs a Heel–Face Turn, deciding that she would rather come back to the prime universe alongside Kirk. To this end she pulls a phaser on him and starts making demands. Captain Kirk Wouldn't Hit a Girl, but thankfully he's not required to, because Lieutenant Uhura sneaks up behind Moreau and instigates a Designated Girl Fight (which she wins). One further obstacle comes in the form of Mirror Spock, who arrives on the scene alongside the crew...

...but he too has performed a Heel–Face Turn, and receives An Aesop from Captain Kirk:

Kirk: You're a man of integrity in both universes, Mister Spock.
Mirror Spock: You must return to your universe. I must have my captain back. I shall operate the transporter. You have two minutes and ten seconds.
Kirk: In that time I have something to say. How long before the Halkan prediction of galactic revolt is realised?
Mirror Spock: Approximately two hundred and forty years.
Kirk: The inevitable outcome?
Mirror Spock: The Empire shall be overthrown, of course.
Kirk: The illogic of waste, Mister Spock. The waste of lives, potential, resources, time. I submit to you that your Empire is illogical because it cannot endure. I submit that you are illogical to be a willing part of it.
Mirror Spock: You have one minute and twenty-three seconds.
Kirk: If change is inevitable, predictable, beneficial, doesn't logic demand that you be a part of it?
Mirror Spock: One man cannot summon the future.
Kirk: But one man can change the present. Be the captain of this Enterprise, Mister Spock. Find a logical reason for sparing the Halkans and make it stick. Push till it gives. You can defend yourself better than any man in the fleet.
Scotty: Captain, get in the chamber!
Kirk: What about it, Spock?
Mirror Spock: A man must also have the power.
Kirk: In my cabin is a device that will make you invincible.
Mirror Spock: Indeed?
Kirk: What will it be? Past or future? Tyranny or freedom? It's up to you.
Mirror Spock: It is time.
Kirk: In every revolution, there's one man with a vision.
Mirror Spock: Captain Kirk, I shall consider it.

Mirror Spock activates the transporter and sends them home. Back in the prime universe, Captain Kirk goes over the events they have experienced, and is then surprised to discover that a new Lieutenant named Marlena Moreau is among his crew. But he stops just short of telling her "And You Were There".

The website The Agony Booth is named after the torture device featured in this episode.

As for what Mirror Spock does after hearing our Kirk's inspiring speech, see the Star Trek Continues episode "Fairest of Them All

One Man with a Vision

One Man with a Vision