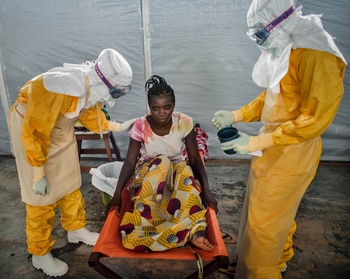 A somewhat common trait among characters who are doctors or clerics, when their desire to cure is their first (sometimes only) priority; it doesn't matter if the character they're trying to heal is a villain, a monster, doesn't want to be healed, or is just plain rude; the medic will not give up on trying to help them.

Can be an indication of a tragic Backstory, where the character lost someone close to them, and vowed to never let that happen to anyone else.

Can be a case of Stupid Good, when the patient they refuse to give up on will probably kill them or go on to murder a lot of people after the medic saves them.

The care needed by the patient need not necessarily be urgent. The trope can simply show that no matter how much verbal or physical abuse the patient might throw at the healer, and however fed up the healer might get with the patient, the healer will not retaliate by leaving the patient to his fate.

Compare Inconvenient Hippocratic Oath where a healer is obligated to render aid in situations where they ought to hesitate, and The Medic, who has a good chance of also being this trope.