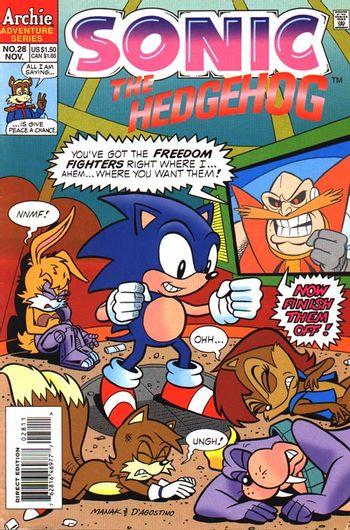 As you can see, this trope also caused Sonic to commit Superdickery.
Advertisement:

One consequence of Easy Amnesia is that a character can be up and about, wandering around with all their faculties about them but with no clue who they actually are. If their arch-enemies find them in this state, they may decide to turn a liability into an asset, by convincing the character that they're really on the bad guys' side.

Thus, the rest of the protagonists find themselves having to not only fight against the amnesiac character, with all his abilities turned to the service of antagonism, but somehow rescue and Deprogram him. If the experience has a larger toll on a character's loyalties or sense of self, even after regaining their memory, it becomes Amnesiac Dissonance.

Used mostly by the kind of show that would use Easy Amnesia in the first place. By necessity this pretty much requires an Idiot Hero to make any kind of sense- one hopes that most people would at least try to figure out who they are before quickly agreeing to a plan that involves killing or seriously maiming a large number of people. This can be averted if the bad guy did a more thorough job of brainwashing than just saying "clearly I am your friend" and the amnesiac just took his word for it.

Then again, Amnesiacs are Innocent.

If the lie comes from the character himself, it's Amnesiac Liar. If it happens to a villain, it's Amnesiac Villain Joins the Heroes. Contrast with Forgot the Call.