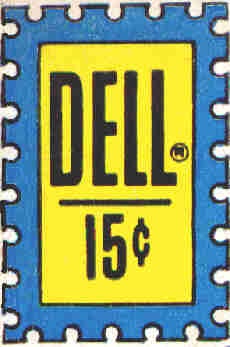 Dell first printed comics in 1929 with "The Funnies", the first newsstand comic book with all-original material. In 1935 it contracted & distributed comic books created by Western Publishing and Lithography (better known as the company behind Golden Books). Licensed properties made up a majority of their output. The company was so popular that it refused to join with the other companies making up The Comics Code Authority & offered its own pledge to parents that "Dell Comics are good comics".

In 1962 Dell & Western Publishing broke up, an event referred to as "the divorce". As most of the titles were owned or licensed by Western they took them with them & formed Gold Key Comics. Dell Comics, once the most popular comics company, had to start up a new comic book company from scratch with the few titles they had left. Dell Comics ceased publishing in 1974.

Dell Comics with trope pages include:

Other Dell Comics provide examples of: