Literature / The Number of the Beast 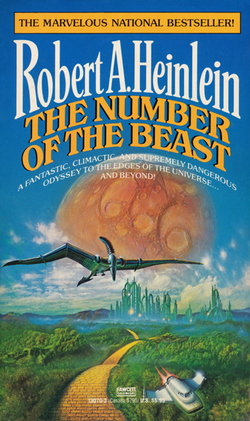 The Number of the Beast is a 1980 Science Fiction novel written by Robert A. Heinlein. It is best known for being a Massively Multiplayer Crossover that unites every single fictional timeline he had ever written and those of multiple other authors, introducing the concept of The World as Myth that would be featured in all his subsequent works until his death. When plotted against his "Future History" series, this book is a sequel to Time Enough for Love, and is followed by The Cat Who Walks Through Walls.

The plot centers around four geniuses, Zebediah ("Zeb") John Carter, Dejah Thoris ("Deety") Burroughs, her father Jacob, and their friend Hilda Mae, who find themselves embarking on a zany romp through The Multiverse thanks to Jacob's newly invented time machine. Along the way, they discover that every single fictional universe ever invented by anyone is real and can be accessed by shifting one's dimensional coordinates appropriately, which ends up taking them into the worlds of Lensman, John Carter of Mars, the Land of Oz, and many others before they end up in the world of Heinlein's own archprotagonist Lazarus Long. Throughout this process, they are pursued by marauding interdimensional adversaries with the power to rewrite history, who end up possibly being controlled by a rival Author. The book ends with the Burroughs and Carters (as Zeb and Hilda have married Deety and Jacob, respectively) joining Lazarus Long's extended family and staging a convention for all the fictional heroes of the multiverse.

Not to be confused with Number of the Beast, the fictional use of the dread "666", although it is referenced by the characters.