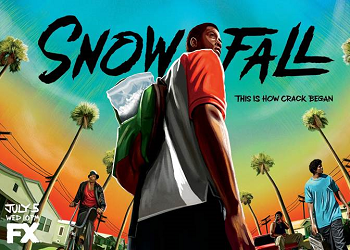 I bet the FX logo's on crack.
Advertisement:

Snowfall is a series airing on FX, created by John Singleton, Eric Amadio, and Dave Andron, produced by Adil El Arbi & Bilall Fallah and starring Damson Idris, Carter Hudson, Emily Rios, and Sergio Peris-Mencheta. The series began its run in July 2017, and has so far run for five seasons. The series was renewed for a sixth season in April 2022, and it will also be the final season of the show.

When a cocaine dealer suffers an overdose in 1980's Los Angeles, a local CIA operative sees an opportunity to gain a foothold in the business. Elsewhere, an ambitious young black man stumbles upon a similar opportunity when his white friend wants to score some party drugs, and an aging Mexican wrestler seeks a change of career.