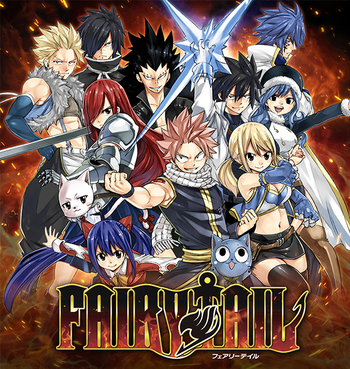 spelled in all caps) is a turn-based JRPG based on the manga and anime franchise of the same name by Hiro Mashima. It is published by Koei Tecmo and developed by its subsidiary Gust Corporation, known for the Atelier series, from which this game draws numerous gameplay elements. The game was released worldwide for PlayStation 4 and Nintendo Switch on July 31, 2020, and for Steam on July 30.

Largely focusing on the plot from the Grand Magic Games through the Tartaros Arcs and adjacent storylines, the game picks up around the time the Fairy Tail guild's best wizards return after going missing for seven years, only to discover that their guild has severely diminished in prestige in the meantime. Players assume the roles of Fairy Tail's members, as well as allies from other guilds, as they take on missions and battles to help rebuild the guild's reputation, expand its resources, and ultimately reclaim its former glory as the greatest guild in the Kingdom of Fiore.

This game marks a number of firsts: for the Fairy Tail franchise, it is the first video game to be released both for home consoles and outside of Japan, while it's Gust's first game to be based on a licensed property.