Video Game / Nights of Azure 2: Bride of the New Moon 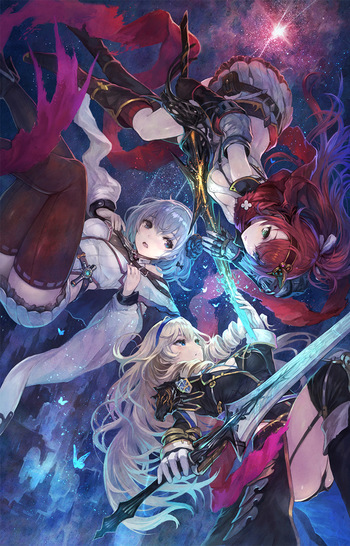 Break through this endless night and sing out the song of your life.
Advertisement:

WARNING: LATE ARRIVAL SPOILERS FROM THE FIRST GAME ARE UNMARKED

Nights of Azure 2: Bride of the New Moon (Yoru No Nai Kuni 2 in Japan) is a JRPG created by Gust Co. Ltd. for the PlayStation 4, Nintendo Switch, and PC and is the sequel to Nights of Azure. The game was released on August 31, 2017 in Japan and on October 24, 2017 in North America.

During the 11th century, a demon called the Nightlord attempted to plunge the world into an endless Night that would put all of humanity in a never-ending slumber. During this time, a woman that would eventually be called "the First Saint" did battle with the Nightlord, eventually managing to slay the demon at the cost of her own life. However, as the Nightlord perished, the demon's Blue Blood rained on the world, transforming all that it touched into fiends that prey on humans. In response to this disaster, a mysterious organization known as the Curia was formed in order to combat the threat of the Blue Blood, the fiends, and the Night.

Centuries later, on the island of Ruswal, the Curia sends one of their agents, a half-human/half-demon hybrid named Arnice, to the island in order to investigate rumors about the Nightlord's return. During this mission, Arnice is reunited with her Only Friend, and eventual Love Interest, Lilysse. Working together, Arnice and Lilysse determined that the rumors of the Nightlord's are indeed true and they report this back to the Curia. To Arnice's dismay, the Curia chose Lilysse as the newest Saint to be sacrificed in order to stop the arrival of the Night. Arnice decides to go against the Curia's orders and protect Lilysse instead of sacrificing her and in her mission, Arnice discovers new evidence that shed light on what truly transpired centuries ago during the battle between the Nightlord and the First Saint. Eventually, after overcoming many hardships, Arnice manages to defeat the Nightlord, saving the world without sacrificing the Saint but at the cost of becoming the new Nightlord herself.

Now, years later, a new threat has appeared in the form of the Moon Queen, Malvasia. In order to combat this new danger to the world, the Curia sends a new agent, Aluche on a mission to protect the Bride of Time, her Childhood Friend Liliana. The Curia knows that Liliana holds immense power, being able to control time, and they plan for her to be sacrificed to the Moon Queen in order to seal her away, much to Aluche's dismay. Soon after, both Aluche and Liliana meet up with their third childhood friend, Ruenheid, who has turned her back on the Curia and has gone with the organization that opposes them, the Lourdes Order. The Lourdes Order, in contrast to the Curia, does not want to sacrifice the Bride of Time as they believe that instead of sealing Malvasia away, it would instead give her complete control of time thus allowing her to destroy the world. As the three friends try to work out their problems, they are attacked by Malvasia whom, during this meeting, referred to Liliana as "[her] bride". Sharing a common goal of wanting to protect Liliana, Aluche and Ruenheid work together in order to combat the Moon Queen but it was for naught as Malvasia's power was too much for both of them to overcome. The fight ends with the Moon Queen killing Aluche while both Ruenheid and Liliana manage to escape.

Soon after, Aluche awakes and is surprised to find out that she has been turned into a Half-Demon by a brilliant doctor named Camilla. Camilla fills Aluche in on what has transpired since her death and she tells the latter that they have been ordered by the Curia to find Liliana, who has gone missing, and proceed with the plan of sacrificing her to the Moon Queen. The two of them head back to Aluche and Liliana's childhood home of Eurulm in order to search for clues for Liliana's whereabouts. During this time, they are joined once again by Ruenheid who is surprised yet happy to see Aluche alive and well. However, despite this joyous reunion, Aluche is plagued by a nightmare of an Azure Moon bringing about the Eternal Night, and she is shocked to find out that the Azure Moon has appeared in the sky over Eurulm as well. Aluche's mission to find Liliana now becomes a race against time to prevent the Azure Moon from becoming a new moon and bringing about the Night. As she progresses further with her quest, Aluche finds evidence regarding Malvasia's true motives as well as signs indicating that the legendary half-demon Arnice is around...and she's not happy.

Nights of Azure 2/Yoru No Nai Kuni 2 contains examples of: