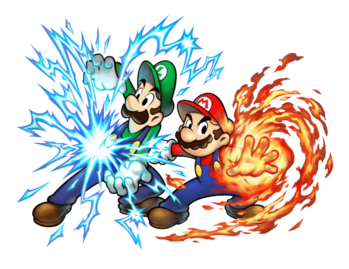 Two plumbers, and neither of them have water powers?
"I brought the Black Bulls' Special Assault Duo! This is Mister Magna, who has Flame Magic, and Luck, who has Lightning Magic!!"
— Asta, Black Clover
Advertisement:

Fire. An elemental force by nature and longtime rival to water (and by extension ice). However, some writers remove water, and electricity has been poised to rival the burning element. Therefore, two partners, rivals, or Foils would have one of them become associated with flame, and the other lightning.

This might be because the two forces are similar yet different, Fire and Electricity are both forms and sources of energy. Both are destructive in an uncontrolled state. Both give off light. Both are symbols of life — lightning of the giving of life, and fire of the saving of life. Both are symbols of power. Both have been used as symbols of divine anger. Both have been used to represent technological advancements. Lightning is direct but short, fire takes its time. Lightning can set things on fire, and fire used right can generate electricity. Both are part of an elemental trinity. People of ancient times used to think that lightning was celestial fire. These reasons are used to underscore the similarities aspect.

Another use of this trope is to symbolize ideals and truths, using them as foils instead of characters. Fire is used to symbolize man's beginnings (Prometheus brought fire to man, and with it intelligence), home, purification and strong feelings. Lightning symbolizes loss of ignorance (The Tower was struck by a bolt of lightning), divine punishment, destiny, epiphany and Man as he is now. Both can also symbolize creativity, divine powers, destruction, and energy.

A Sister Trope to Fire/Water Juxtaposition and Light/Fire Juxtaposition. If combined with the latter, you may get Fire, Ice, Lightning. See also Life/Death Juxtaposition when one of those elements has a creation motif and the other a destruction motif. Compare Elemental Rivalry.