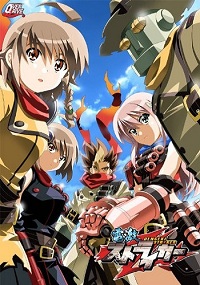 A Visual Novel and H-Game released by Overdrive in 2011 and licensed by MangaGamer in 2012.

Yuuki Yamato is an ordinary kid who idolizes the comic book hero, Dengeki Stryker, a bionic human who vows to protect Japan from the fictional Balbora Empire. Aspiring to be like the titular superhero, Yamato constantly protected his childhood friend, Hongo Haruna, from the local bullies. However, their relationship did not last long, as Haruna had to move away due to family circumstances. Right after hearing her goodbyes, Yamato fell into despair and ran to the local shrine, where he met a mysterious old man. The elderly man called himself the "Memory Collector", who can grant any wish in exchange for the requestor's memories. Desperate to protect Haruna, Yamato wished to become Dengeki Stryker. As a result, all his memories since birth were taken away as payment, and his body became a vessel for the character he always wanted to be, who refers to himself as Stryker Zero.

Ten years later, soldiers from the Balbora Empire suddenly show up and wreak havoc in a Japanese city. Hence, Stryker Zero decides to stop them, and his new adventure begins.

Dengeki Stryker contains the examples of the following tropes: