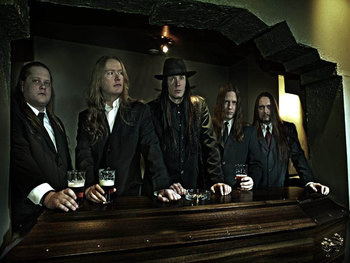 The Northernmost Killersnote From left to right: Miika Tenkula, Vesa Ranta, Ville Laihiala, Sami Lopakka, Sami Kukkohovi
You thought you'd just put your
head into the Noose,
and let it all go...
and so you did,
Oh yeah, you did!
Noose
Advertisement:

Sentenced, hailing near the city of Oulu in northern Finland, was one of the most influential bands of the 90's Finnish metal scene, paving the way for both Finnish Death Metal and Gothic Metal.

Founded in 1988 by guitarists Miika Tenkula and Sami Lopakka, the Sentenced had some line-up changes before settling on Vesa Ranta on drums and Taneli Jarva on bass, with Tenkula on the vocals. The band released their debut album Shadows of the Past in 1991, which was a typical death metal album of the age that went mostly unnoticed.note First pressing was only 2000 copies Two years later they released their sophomore album North from Here in which Jarva took over the singing. Musically it was far more technical, melodic and folky and ended up being one of the earliest examples of Melodic Death Metal. The album caught the attention of Century Media Records who quickly released it worldwide, and in 1995 the band had a breakthrough with the third album Amok. However the following year Jarva quit due to personal issues.

In late 1996 Sentenced released Down, with Ville Laihiala becoming the new singer and Sami Kukkohovi becoming the new bassist.note However, he only joined after the recording of the album, with Tenkula playing bass alongside guitar. Down saw Sentenced transition to more melodic Gothic Metal, primarily due to Laihiala's cleaner vocals. The following album Frozen dropped pretty much all death metal influences, and the band continued along this line on the next three albums Crimson, The Cold White Light and The Funeral Album.

The Funeral Album, as the title implied, ended up being Sentenced's last, with the band playing its final concert on the 1st of October, 2005 in their hometown of Oulu at sold-out Club Teatria. This concert ended up being released the following year as the live album Buried Alive. Any hope that Sentenced might one day rise from its grave was crushed in 2009 when guitarist and main songwriter Miika Tenkula died of a heart attack.

Troping me, Troping you, Troping all we have!

Good evening, tight-asses, shit-bellies, friends and foes! Welcome... to the funeral!
It's time to play the last song. So get the fuck out of here! FAREWELL!
I think I'll just put my
head into the Noose,
and let it all go...
and so I will,
Oh yeah, I will!
Feedback

At their last concert ever, Sentenced gets the audience to sing "The Suicider" with them one last time.

At their last concert ever, Sentenced gets the audience to sing "The Suicider" with them one last time.