Literature / The Quest of the Unaligned 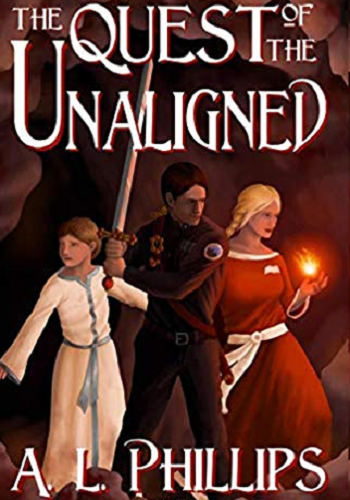 The Quest of the Unaligned is a novel by A.L. Phillips.
Advertisement:

In the city of Tonzimmiel, where everything is governed by contracts and rankings, Alaric is a ninth-level certified Security Chief in the Tonzimmel First Security Force (TFSF). But his life is upended when a mysterious stranger appears out of thin air in his favorite bar, hails him as the Crown Prince of Caederan, and claims to be Ruahkini, royal steward of Caederan and a mage of air. Like every good Tonzimmelian, Alaric knows that there is no such thing as magic and Ruahkini is insane, but when Ruahkini tricks him into signing a contract stating that he will complete the Quest of the Unaligned, he has little choice but to attempt it. Joined by Laeshana, a beautiful and intelligent aesh with her own agendas, Alaric sets off on an adventure that will force him to question the assumptions that have shaped his life for as long as he can remember.

The Quest of the Unaligned provides examples of the following tropes:

Alternative Title(s): Quest Of The Unaligned