Literature / The Quest For Bunny Island 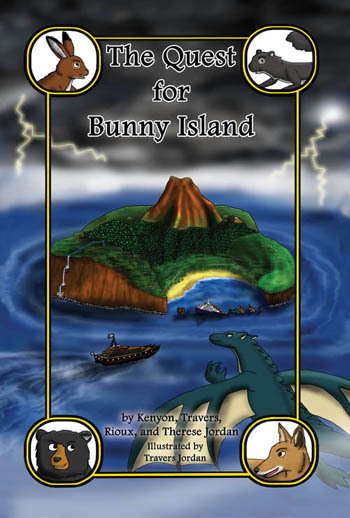 Warning: Dragons may be bigger than they appear.
Seeing the dog and cat - who had begun backing away, barking and meowing - the huge grizzly asked Bob Bear, "How about if I eat them? I mean, they're not talking animals, right?"
At this, the cat said in English, "No! We talk! We talk! Don't we?"
To which the dog responded, "Bark, bark! Aw, forget it."
—The Quest for Bunny Island

The Quest for Bunny Island

relates the tale of a steadily growing band of talking animals, and their entertaining, dangerous, (and often funny) quest to find a home for themselves.

It is the first work by a four-author team: Kenyon, Travers, Rioux and Therese Jordan. Illustrated (primarily) by Travers Jordan, who also produces Planescape Survival Guide and Harry Potter Comics (the former with co-author Rioux).

The story is largely based on the stuffed animal adventures played out in Travers and Rioux's parents' basement many (for the most part) years ago.