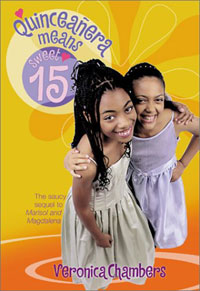 The sound of their sisterhood.
Advertisement:

Best friends Marisol and Magdalena live in Brooklyn, and both have grown up with extended Latino families. When Marisol's mother sends her away to Panama to live with relatives however, it puts her American values to the test, as well as her friendship with Magdalena.

In the sequel, Marisol and Magdalena are making plans for their quinceañera parties, their fifteenth birthday celebration that they've been waiting for their whole lives. They've promised each other that they will be the dama de honor at each other's quince. But quinceañeras are expensive, and Marisol's mother doesn't know if she can afford a party at all, especially not one as extravagant as Magdalena's. And while Marisol was away in Panama, Magdalena became friends with two girls Marisol can't stand. Marisol wonders if her year in Panama changed her—-maybe she isn't cool or rich enough anymore to be Magda's friend.