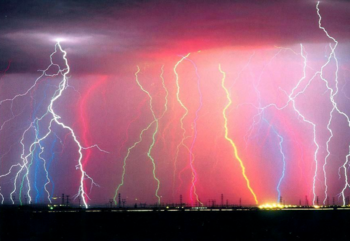 Now available in vanilla, cool mint, blue raspberry, cherry, banana, and lemon-lime!
"...I mean, he does have computer-generated blue all over him. That's what electricity looks like, right?"
— Your Movie Sucks describing Electro, The Amazing Spider-Man 2 Review

In Real Life, most lightning bolts are purplish white or bluish white

. Sometimes they're reddish, orange or even greenish.

However, in certain types of works, lightning bolts and other types of electricity are chiefly yellow (which is quite an uncommon color for lightning, at least when not having an orange tinge), often a simple zigzag shape and seldom striking from the ground to sky or from the one to be shocked to the object. Justified since yellow is a standard warning sign color, associated with electricity and fire in general (and as we all know, lightning is electric). Plus, etymologically, the word "electric" came from the Greek word for amber, a yellow gem that was known and used by ancient scientists for its electrostatic properties.

Most video games with the Fire, Ice, Lightning trinity will also make lightning yellow to differentiate it from ice (and to exhaust the three primary colours).

In live-action films and more realistic video games, though, lightning bolts are still predominantly blue. However, sometimes it is very blue so that there is no white seen. Alternatively, purple can be added to the mix, but again it tends to be a very vibrant purple. In a manner, such purple lightning can clash well with the traditional yellow.

A Sub-Trope of Color-Coded Elements.