This page assumes that you've played Marvel's Spider-Man for the PlayStation 4, and spoilers for its main story and The City that Never Sleeps DLC will be left unmarked. You have been warned. 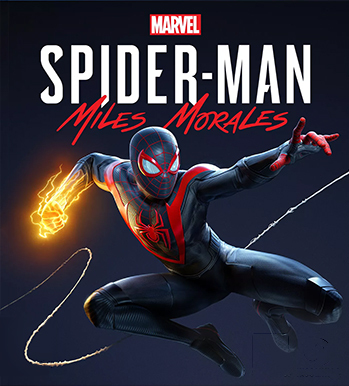 This is my time.
"...'A hero's just someone who doesn't give up.' Your dad said that. He was right. Now, it's your turn. Go be a hero, Miles."
— Peter Parker
Advertisement:

As the title suggests, the game follows Miles Morales after the death of his father, police officer Jefferson Davis. When he wasn't busy saving New York as Spider-Man, Peter Parker helped Miles adjust to life without a dad, remembering the experience he faced after the death of Uncle Ben. This ultimately put Miles on the front lines when helping contain the Devil's Breath contagion as Spider-Man fought the Sinister Six, and as a result of a mutated spider making direct contact with him inside the community center where he was working, Miles gained spider-powers of his own.

After the coast was clear once again, Peter and Miles learned each other's secrets, and the older hero eventually agreed to help train his younger counterpart so he could get into the swing of becoming the second Spider-Man. However, not long after his training begins, Miles comes across a threat that he has to deal with on his own: a group of tech-based criminals have targeted a major energy corporation, and it's tearing Harlem apart. Miles takes it upon himself to stop the havoc before it completely devastates the part of New York that he calls home.

Insomniac has noted that the title is not a full sequel to Marvel's Spider-Man, but is instead a stand-alone expansion closer in size and scope to Naughty Dog's Uncharted: The Lost Legacy compared to the other Uncharted titles. As such, the narrative is focused more on expanding Miles' place in the setting rather than following up on Peter's story, which is being followed up in Marvel's Spider-Man 2, set to release in 2023. (Peter does, however, factor into Miles' story in this game.) The Ultimate Edition of Miles Morales also comes bundled with a PS5 remaster of the original game. The remastered version has also been announced for Microsoft Windows, set to release in Fall 2022.

, Spider-Man: Into the Spider-Verse Suit Announcement

Miles Morales: Okay... Let's do this.