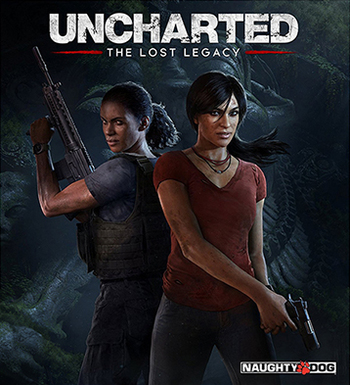 "Guns blows door to the system..."
Nadine Ross: Think it's safe?
Chloe Frazer: You know that treasure hunting is not a good gig for the risk-averse, right?
Nadine: Neither is being a mercenary. Difference is, when I pull the pin on a grenade, I know what's going to happen next.
Chloe: My way's much more fun.
Advertisement:

Uncharted: The Lost Legacy is the standalone entry in the Uncharted series, and the first entry in the entire franchise to not feature Nathan Drake as the protagonist.

Set six to twelve months after the main story of Uncharted 4: A Thief's End, The Lost Legacy has Chloe Frazer (last seen in Uncharted 3: Drake's Deception) on the hunt for the Tusk of Ganesh in the ruins of the Hoysala Kingdom (located mainly in the modern Indian state of Karnataka). The artifact is of personal significance for her, and to do so she allies with Nadine Ross, disgraced ex-leader of Shoreline, seeking a score to get her reputation back. They traverse the ruins of Halebidu and Belur in the search of the artifact while getting into conflict with a warlord named Asav, who is also on the trail of the same artifact and has separationist ambitions.

The Lost Legacy provides examples of: