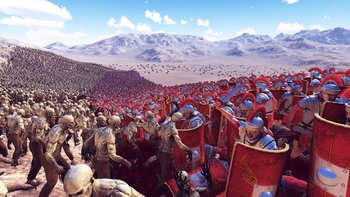 "Here is a sandbox like no other. Create massive battles with absolutely no limits. Want to see 10,000 chickens fight an army of Romans?? Sure, why not. Want to see a company of WW2 U.S soldiers fight 11,000 Medieval soldiers?? There are simply no limits to the carnage you can achieve in UEBS."
— Official description on the game's Steam page
Advertisement:

Ultimate Epic Battle Simulator is a Realtime Sandbox Strategy game where players can create battles between a wide variety of units.

Developed and previewed by indie developer Brilliant Game Studios (also known as "Ryan"), UEBS was available for early access on April 12 and then released on Steam in June 1, 2017

. Becoming a mainstream trend among gamers who want to let their creative and experimental imaginations run wild.

Ultimate Epic Battle Simulator 2 was announced in 2021 which ups the number of units to over a million.