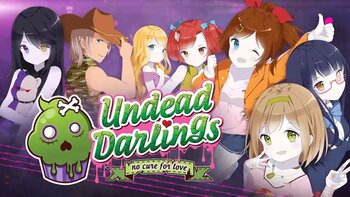 An anime-styled Dungeon Crawling Role-Playing Game and Visual Novel hybrid developed by Mr. Tired Media and published by Sekai Games, Undead Darlings: No Cure For Love released digitally on September 28th, 2020 for the PlayStation 4, Nintendo Switch and Steam, and for GOG on August 16th, 2021.
Advertisement:

The story follows Reginald P. Happenstahnce(Reggie) who, after being woken up from a coma that his father put him under by his childhood friend Pearl Moira, who is now undead but still has her sentience, he discovers that a zombie apocalypse happened while he was out cold. After getting caught up to speed by Pearl, and meeting a survivor named Buck Wampum, who happened to bust into his thought-to-be-abandoned home to loot it, they all decide to go look for a cure that Reggie’s father left behind, and take it somewhere that can hopefully use it to mass produce a cure for the virus that caused it all.

Over the course of the game, you can have Reggie develop a romantic relationship with each of the girls, and get an ending together with one of them. Or all of them.

Since, unlike the girls, Reggie is unable to properly fight the weird creatures created by the virus, and at risk of being killed/turned, they fight instead of him, with him taking the role of the group’s ‘loot donkey’, carrying any items and weapons they find.