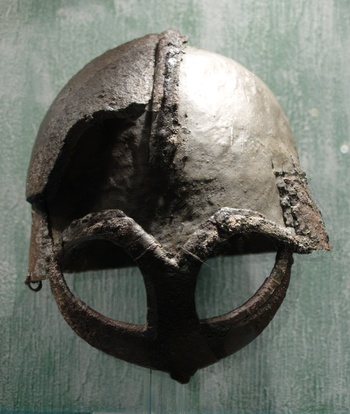 The only known surviving Viking Helmet. Note the lack of horns.
A furore Normannorum libera nos, Domine
( "Free us from the fury of the Northmen, Lord.")
Advertisement:

The Viking Age stretches from the 8th Century to the mid-11th Century. It's an era of history that belongs to the so-called Dark Ages and The Low Middle Ages, taking place after the fall of The Western Roman Empire and the formation of Moorish Spain, and ending just before The Crusades properly began.

The era made a sizable impact in song, memory, language, and culture, but is notorious among historians, both academic and popular, for leaving precious little information in hard historical facts. The warriors came from Scandinavia — mostly from modern day Denmark and Norway, but also from Sweden — and charted a course that took them to areas further and beyond their land or origin. They were raiders (okay, pirates), explorers, and traders whose famous iconic longships allowed them to serve simultaneously as a merchant, marine, and riverine power, navigating both deep and shallow waters. They made inroads into Britain, France, Spain, Sicily, the Byzantine Empire and the area of land known as Kievan Rus'. They settled in Greenland and also sent an expedition into North America that failed to become a permanent settlement, known today as "L'Anse aux Meadows" in Newfoundland in Canada. Their many names illustrates how wide they spread their net. Initially, they were simply called Danes or heathens; the Irish distinguished between 'white' and 'black' foreigners (Finngall and Dubgall respectively). In Eastern Europe, the Slavs called the Scandinavian invaders Rus, a Finnish word for the Svear Swedish settlers, which means "rowers" or "oarsmen", and which was perhaps a source for the name of Russia. The Eastern Romans called them Varangians and the Frankish called them Normanni (Northmen), and the region of France where one of the Vikings settled and gained a Dukedom is known as Normandy. The English were the first to call them Vikings, which was a Scandinavian word for raider, which referred to only one aspect of their society but in Pop Culture Osmosis, is the name for an entire people, civilization and an era.note As a result, some historians have suggested "The Late Germanic Iron Age" or "The Scandinavian Expansion Period" as alternate and more fitting names for describing the period.

The Viking Age begins with the 793 CE raid on the Lindisfarne Monastery. This attack was far from the first of its kindnote There are quite a few older historical records describing both Germanic and Gaelic tribes making similar sea-based raids. Some of these were even conflated with early Viking activity, until later scholars attempted to apply a more "strict" definition., but it captured in much Purple Prose how the medieval chronicles cemented the legend of the Northmen, as pagans and heathens whose lust for riches and plunder did not waver before any act of blasphemy and impiety. A major frustration for historians until very recently, is the fact the primary sources of the Viking Era come from the perspective of their enemies. The earliest known written materials from the views of the Northern peoples is from the medieval era after they had assimilated and converted to Christianity and become part of their native and/or settler kingdoms. Modern historians use numismatic studies of coins, relics (such as the Runestones across Sweden and England, graves and other markers across Russia and Ukraine), and other materials (such as the few surviving longships and the famous helmet) to reconstruct aspects of their culture.

The period is commonly seen as coming to its end in 1066, with the Battle of Stamford Bridge, which took the life of the ambitious Norwegian king, Harald Hardrada, and thereby ended his attempt to claim the English throne. Although further major Scandinavian campaigns in Britain and Ireland took place in the following decades, such as those of King Sweyn Estrithson of Denmark in 1069-1070 and King Magnus Barefoot of Norway in 1098 and 1102-1103, it is generally understood that Hardrada's death was the endpoint for any serious attempt from the Scandinavians to regain their old foothold on the British Isles. With William the Conqueror gaining the English throne in 1066 (by a twist of historical irony, Hardrada's invasion attempt had inadvertently helped his victory alongnote William's invasion pretty much arrived just a few days after the Anglo-Saxon king Harold Godwinson defeated Hardrada, forcing Harold to march over 200 miles in a week while gathering forces on the way to reach the Normans. It is debated whether the Anglo-Saxon forces were actually exhausted from their march (the Battle of Hastings still lasted a day) or if it was just their smaller numbers and less diverse variety of troops which could have been bolstered by taking more time to muster that could have conceivably changed the battle's outcome (feigned retreats were performed in the battle by the Normans, and the Anglo-Saxons' lack of cavalry or archers prevented them from effectively punishing such tactics)...not helped by how Harold was forced to disband his southern militia so they could make it to harvest a month before the battle started despite knowing the Normans were going to invade to that direction and he probably advanced toward Hastings with all speed to prevent the Normans from breaking from their beachhead (who already built fortifications and were raiding nearby).), the following century of the Isles would instead be defined by The House of Normandy, themselves descendants of the vikings. Meanwhile, in the East, the Scandinavian colonisers had by this time long since settled down and more or less blended into the local populations, having adopted Slavic languages, customs, and names.

Their travels and territorial reach spread far and wide, becoming the first civilization to explore four continents (North America, Europe, Northwest Asia, North Africa). They also revived and built trade routes between Western and Eastern Europe; playing a key role in the Christianization of the Slavic Tribes and the founding of Russia. For a long time, historians and chronicles, basing themselves on their medieval reputation and inspired by nationalist accounts of defending the homeland against invaders have deprecated the Vikings and their culture. This changed in the age of The Enlightenment and Romanticism, first in the Scandinavian nations and then in Victorian England. Modern views tend to be more balanced about the role played by the Vikings. The historian Fernand Braudel noted in his A History of Civilizations that "Economic historians" are "indulgent towards the Vikings" because "by putting back into circulation the treasures that they pillaged, especially from the Church, they reactivated capital" and trade which had been dormant since the end of The Roman Empire.