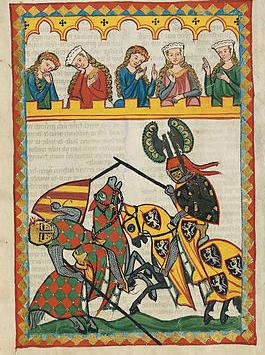 14th century jousting - notice how the ladies are loving it. note And the example of Unmoving Plaid.
"By a knight of ghosts and shadows
I summoned am to tourney,
Ten leagues beyond the wide world's end –
Methinks it is no journey."
— Tom o'Bedlam's Song
Advertisement:

When knights were bold, they fought not only in battle, but in tourneys. Originally this was a melee — divided into two sides, the knights proceeded to go at each other with great vigor and frequent deaths. As time went on, the more familiar jousting was added; by the time of the Rennaissance, jousts often dominated, along with other entertainments, especially highly stylized pageantry. (The original tournaments, named so for the way the horses would turn to do the next pass at arms.)

Not surprisingly, this often features in fiction with knights from the Chivalric Romance onward. Usually just jousting, and fairly innocuously — deaths are treated as rare freak accidents. Though the jousting can also contain hidden rivalries, or even be Trial by Combat. In some cases, a princess or great lady will marry the victor.

The Black Knight may show up, unidentified. Indeed, some knights have taken advantages of the armor to maintain a Secret Identity as a menial servant — often three tournaments before he's unmasked.

It can be distinguished from the Gladiator Games in that tourney are fought in by men of Royal Blood, or Blue Blood. Without being knighted, a character can't compete. (At least, if he tells the truth.) It's very common for it to be part of the celebration after a knighting — after all the new knight must show what he's made of. It's also very common for a knight to carry The Lady's Favor for it.