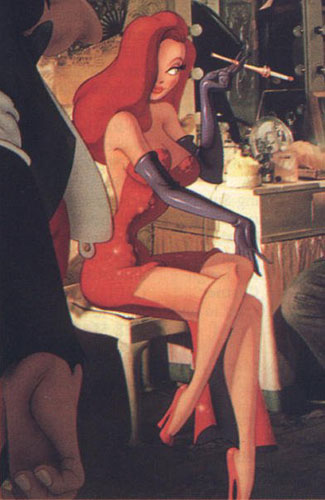 A female character who provides a significant amount of Fanservice (aimed at straight men, though obviously bisexual women and lesbians can appreciate it as well), ranging from simple revealing of cleavage, midriff, shoulders or legs, to shots of her curves, hips or derriere (even when covered).

Her clothing is mainly there to accentuate her figure. Her wardrobe mainstays are bikinis/swimsuits, lingerie, fishnets, stockings, garters, short skirts, equally short shorts, thigh high boots or stiletto pumps, and low-cut dresses and shirts. Alternatively, she might be covered from head to toe, thus showing no skin at all, but her costume will be tight and stretchy enough to show her bust and the outline of her hips. Bonus points if she's The Tease. In general, she will appear more often in merchandise aimed towards straight men to further attract straight men to the product, with vice versa being the case for Mr. Fanservice.

Either way, the camera seems to have the hots for her, and the viewing audience is expected to feel the same way. While the way a Ms. Fanservice is presented can come across as sexist if handled badly, there is nothing inherently wrong with the trope itself, nor does it necessarily ruin her character. The real trick is to give her a genuine, fleshed-out personality and a meaningful role in the story beyond being eye candy, instead of having her exist solely as a Flat Character. (Besides, being "flat" usually doesn't fit this type of character.) If the Ms. Fanservice has a particularly cruel personality (usually a villain), she also qualifies for Fan Disservice.

Please note that there is no requirement to be single to fit into this trope. Many of these characters are married. For the Spear Counterpart, see Mr. Fanservice. If she also sleeps with most of the crew, she either Really Gets Around or is a Good Bad Girl. Subjected to multiple Double Standard tropes, especially if she gets a nice dose of Character Development or Hidden Depths aside from her hot looks, and yet the fandom refuses to see them (or remembers nothing else about them).