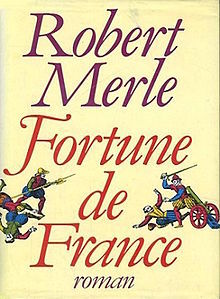 Fortune de France is a series of French novels by Robert Merle published between 1977 and 2003, and also the title of the first book (1977), which is titled The Brethren in English.

It is an epic set in 16th and 17th century France. The narrator, Pierre Siorac, is a young Huguenot (aka Calvinist Protestant) noble who tells the reader about the religious wars of that time, as well as the adventures of his father, then his own.

The first novel was meant to be standalone, but was so popular the author kept writing sequels for 26 years. The first book is therefore much history telling (plus some everyday life at dangerous times) while the sequels have the narrator face increasingly adventurous situations, and witness major historical events firsthand.