This article lists characters created for the MUGEN engine that do not exist elsewhere. For source fighting game characters and characters who exist outside of MUGEN, please see the appropriate character sheet.

MUGEN games with their own Character pages:

"You must defeat Tu Shou to stand a chance."

The quintessential "template" character for MUGEN, Kung Fu Man is a martial artist who fights to rescue his girlfriend from the evil Suave Dude. Despite his basic gameplay and shallow level of code, (to help beginners learn the programming language) or perhaps because of them, he remains a significantly popular character, with countless edited versions of him by innumerable creators across the community.

The portrait that S.Y.D.'s Another Kung Fu Girl Z uses

The female equivalent to the original Kung Fu Man (not related or connected to him in any way). She may seem like a carbon copy of him, but she is much more in depth than what she appears to be. And while she borrows quite a few moves from Kung Fu Man, this quickly escalates into a wide array of other moves unique to herself. She herself has been remade into various different characters as well, with the most well known version of her made by S.Y.D. (Another Kung Fu Girl Z).

Created and sprited by Reubenkee

A divine warrior made to combat evil with powerful blades, pyromancy and acrobatic skills. Dragon Claw was sprited, conceived and coded entirely by the late legendary Singaporean creator Reubenkee, famous for having created the original evil shoto edits and making an evil form of Ken Masters playable before SNK vs Capcom Chaos. He remains popular even today for the obscene amounts of effort and love put into the character by its creator, as well as just looking damn cool and having a rewarding combo system. His basic design is based on Katana from One Must Fall, but the sprite itself is an original creation.

Initially an edit of Freeman from Garou Mark Of The Wolves, Ravenous was re-sprited entirely by On.Off and given a new moveset. Lord Ravenous is an Obviously Evil man with long red hair in a black sleeveless coat wielding an axe and a revolver. He seems able to transform his body into grotesque shapes in several moves. Unfortunately, the character itself is very old and poorly programmed, but still has a significant following just because his concept and moves are well thought out and cool to look at. The character was eventually remade by The Fclass 97.

Created and sprited by Aiduzzi 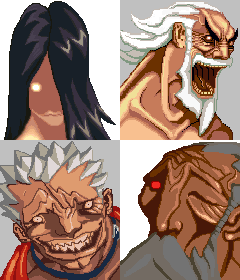 Four crazy, over the top hard hitters conceptualized and sprited entirely from scratch by Italian artist and programmed Aiduzzi. Ella is a Stringy-Haired Ghost Girl and homage to various horror films, while the other three are a bit more…hard to pin down. Ubu is an old man who shoots fire from his fingers, Kuando is a crazy loudmouth brawler, and Giano is another old man with very strange, unpredictable attack animations. The would later appear in their own fighting game, ''Rotten Core''.

"Here's some advice. If you want your kicks to look sexy, wear a hoodie!"

A relatively new and popular character, Bluestreak is a man with electricity based powers who can call upon the powers of a demonic gargoyle.

"Life is full of disappointments, and you're definitely one of them pal!"

Formerly from an extremely obscure Japanese game (Fighting Game Creator), he was taken by the aforementioned author and revamped into a completely different character for MUGEN and is well liked to this day.

A character who is similar to Tetsu Yatogi above her. She's more of a Game-Breaker compared to him but is still an interesting character.

The villainous man who kidnapped Kung Fu Man's girlfriend. Who he is and what his motivations are are never really elaborated on, but he does carry a gun!

Created by Kamekaze, voiced by Kaneto Shiozawa (via recycled clips from Kairi in Street Fighter EX)

A different kind of Shotoclone that uses Ken's sprites from Capcom vs. SNK 2: Mark of the Millennium. Allegedly the character is meant to be an evil spirit possessing Ken's body. More likely, this explanation is a cop-out to make up for the lack of custom sprites.

Years before it became a popular trend to re-sprite Kula into original creators, Nao&M took her sprites and recycled the animations into a completely new moveset, in an example of low-budget creativity not unlike the aforementioned Reject. Instead of calling it an EX version, the creators instead re-christened their character and gave her a new personality and color scheme. To this day she is still a very popular character, being re-created several times and having a decent chunk of fan artwork.

Created and sprited by Seanaltly

A roughneck police detective, initially a part of the creator's fullgame, "SHADES of Manhattan" but became incredibly popular outside of the game for his distinct personality, rewarding gameplay and over the top voice acting. His popularity became so overwhelming that he showed up in one of the creator's other projects, Capcom vs. The World.

A dark demon that originally appeared in the adult visual novel Kizuato represented using Eddie's sprites. He attacks mainly by slashing the enemy with his claws, and he is insanely fast. Was especially infamous for his cheapness, so much so that multiple people made nerfed versions of him.

"Here's your lesson kiddies, this is almost how you do an original character."note This isn't exactly how he looks like, by the way.

An MS Paint drawn man who, after his hamster Mistah Ham Ham is killed in yet another violent street fight, proceeds to feed the vicious cycle of violence in the hood.

Created and voiced by Basara-kun

"You must defeat... bah, I forgot the name of the guy."note A spoof of Ryu's iconic winphrase.

A guy who loves street fighting and makes his own journey to be the best just by improvising moves that learned from other fighters. The first original creation of his creator (which also made the voices), Eric is one of his most famous creations and sometimes he uses Eric as base for various of his characters.

From the maker of some of the most powerfully made characters in M.U.G.E.N comes his pride and joy. She's a Japanese schoolgirl who may seem like your average human but she boasts serious hidden powers and even commands her own humongous mecha.

A son of the mafia, Eiji rejected his origins and walked away to find a life of his own, changing his last name. His rage makes him developed a hidden power: to produce flames from his own body. He became part of NESTS thanks to Igniz, which tricked him about bring to life his supposely dead girlfriend (sort of, as the form of her clone) if he became one of his henchmen. Now, after know the truth of Megumi being alive (not a clone) and experimenting with her, Eiji goes against Igniz for a personal vendetta.

The first original character made by Rikard (coding) and Orochi Dark Cloud (spriting), which ended with more characters that became part of the same story, included Megumi and her younger brother Rikard.

This character is notable for being the first commissioned Mugen character ever. She's super girly, unlike Borghi's more well-known characters in The Black Heart.

"Your brother is no more, his soul is mine now."

A woman with a beartrap for a head, who has an arsenal of strange attacks.

A very deep-voiced stage actress with a set of skills in the art of acting.

Even harder to find than Very Uncommon Akuma.

Teaf's/Tifu's Characters
Five obscure characters originating in M.U.G.E.N. as playable characters purely designed by Teaf: Shartel, Ferir, Rucheca, Grizela, and Harmir. They are not without haters but they are very much beloved: they are completely original creations of the author in virtually every way, boast clean and high resolution graphics except for one character in terms of sprites, and a decent amount of lovely fanservice; but, they're also furries — which are already despised by quite a few communities, said fanservice almost borderlines on NSFW in ways uncomfortable for some players (with two characters officially having explicitly NSFW fanservice), and they are also notorious for being massively powerful characters in the hands of an expert(s) or with the A.I. at its most powerful. They all have a combo system superior to Dragon Claw's (even Grizela), perfect guards that increase their energy gauge, critical hit capacity, and a 4-bar energy gauge completely separate from the 3 bar hyper gauge that is responsible for EX Special Moves, parry shields that create a window of intangibility after performing them, combo breaker bursts, combo cancels, and Fairy Fire assists. Said AI - while capable of being lowered, is also an absolute pain to deal with on higher difficulty settings. With all of this, they are all essentially to M.U.G.E.N. as Fox McCloud is to Super Smash Bros. Melee since they're nowhere near easy to master and they are interesting and rewarding characters for doing so. Any personal information on them can be found on the Fanatail website and Teaf's other websites (but you should at least be able to understand or translate Japanese). A future candidate to join the other girls in M.U.G.E.N. is currently known as "Lazlotte/Razurotte", the devil's daughter with mismatched eyes.

A bestial, humanoid mercenary who likes to travel far and wide.

A woodland resident who while cheerful and playful is far from helpless.

A magess who hails from a Fanatail Magic Academy and her magic is second to none.

A humanoid dragon(?) with a sky-high pride and the physical prowess to match it.

A humanoid harpy who is the poster-girl and security guard of a harpy magic shop.