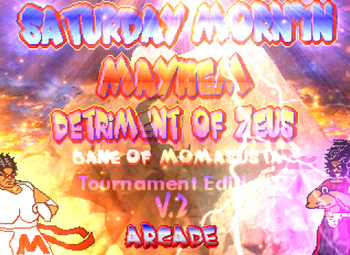 Saturday Mornin Mayhem is a freeware game developed from the M.U.G.E.N engine by Derrick D. Rowell, better known as DDR Creations. Taking inspiration from Capcom's fighting games, Looney Tunes and Saturday Morning Cartoon, the story's premise consist of how a clone of Saint Nick known as Saint Not! with the help of his computer creator Big Baby put heroes against other heroes by kidnapping their most prized treasures and blackmailing them to destroy other heroes with the mindset of crushing the remaining lone hero so he can obtain the love of the children and the world.